Dr. Frederick Young is Professor Emeritus of History at Saint Mary’s University, where he taught for more than four decades. He taught continental European history with a specialty in German history of the late 19th and early 20th century, particularly German economic development and the concomitant German emigration to South America.  Dr. Young frequently taught a seminar on the Era of Napoleon, and as a result he became interested recently in the contemporaneous War of 1812 here in North America, which led to his book published by the Penobscot Bay Press in Stonington, Maine.

Terry Murphy is Professor Emeritus of Religious Studies and History at Saint Mary’s University. A specialist in the religious history of Canada, he is the co-author/co-editor of three books in this field: Religion and Identity: the Experience of Irish and Scottish Catholics in Atlantic Canada (Jesperson Press, 1987), Creed and Culture: the place of English-speaking Catholics in Canadian Society, 1750-1930, (McGill-Queen’s University Press,1993) and A Concise History of Christianity in Canada (Oxford University Press, 1996). In addition to these books, he has contributed a number of articles to Canadian and international academic journals and reference works. He is past editor and a long-time editorial board member of the Canadian Catholic Historical Society’s journal, Historical Studies. He is currently a collaborator on  a SSHRC partnership project to study the Irish population of Halifax in the nineteenth century. His contribution to the project will focus on the transformation of the religious life of Roman Catholics in the middle decades of the nineteenth century.

Dean Jobb, an award-winning author and journalist, is an associate professor in the School of Journalism at the University of King’s College. He discovered the story of Thomas Raddall and his mysterious American friend while researching Prince of Fraud: The Incredible True Story of Leo Koretz, Master of the Ponzi Scheme, and the Great Chicago Oil Swindle, to be published by New York-based Algonquin Books in the spring of 2015. Dean’s previous books include The Acadians: A People’s Story of Exile and Triumph (John Wiley & Sons 2005) and Calculated Risk: Greed, Politics and the Westray Tragedy (Nimbus 1994). He is a frequent contributor to Canada’s History magazine and his work has appeared in the Globe and Mail, National Post, Canadian Business and other major publications. His website is www.deanjobb.com.

Katie Cottreau-Robins is the Curator of Archaeology for the Nova Scotia Museum.  As Curator she works to steward an archaeological collection consisting of nearly half a million artifacts and representing every historic cultural group and time period in the province. Beyond the collection, her work focuses on collaborations and partnerships with institutions, departments and organizations seeking to manage, protect and study archaeological and heritage resources.  Katie works regularly with students at the undergraduate and graduate level. To enhance that work she recently joined Saint Mary’s Anthropology Department as an Adjunct Professor. Katie also has a research mandate at the Nova Scotia Museum.  As part of that mandate she graduated from Dalhousie’s Interdisciplinary PhD program in October 2012. The presentation draws on her dissertation research.  As provincial archaeologist Katie has the opportunity to link to a wide range of heritage-related initiatives. Currently, she is part of the Editorial Board of MUSE, Canada’s national museum magazine and the Organizing Committee of the upcoming OMOHUNDRO Institute of Early American History and Culture Conference taking place here in Halifax this June.

A scholar, historian, poet, and social and cultural commentator, Dr. Afua Cooper’s expertise in and contributions to the arts, history, and education were recognized when she was presented in 2005 with the Harry Jerome Award for Professional Excellence, and in 2007 with the Planet Africa Renaissance Award. Afua holds a Ph.D. in Black Canadian Studies and the African Diaspora from the University of Toronto. Her expertise includes African Canadian culture, Black women’s history, gender, slavery, abolition, and freedom, Black literatures, and education. She has conducted research on African-descended people and their culture across Canada, and internationally in Jamaica, France, the United States, Britain, Senegal, and Ethiopia. Her co-authored publication We’re Rooted Here and they Can’t Pull Us Up: Essays in African Canadian Women’s History won the Joseph Brant prize for the best history book. Her ground-breaking book on Canadian slavery, The Hanging of Angelique: The Untold Story of Slavery in Canada and the Burning of Old Montreal was nominated for the Governor General’s award. Afua has curated and worked on five exhibits including, The Underground Railroad, Next Stop Freedom, Enslaved Africans in Upper Canada, and The Transatlantic Slave Trade. In addition, Afua has designed and taught courses on gender, and Black history and culture at several universities. She has also lectured on these topics nationally and internationally. Further, Dr. Cooper served as the coordinator and chief knowledge officer of the Ontario Initiative to Commemorate the Bicentenary of the British Slave Trade Abolition, in 2007. Her work on Black Canadian history and culture has made her the leading Canadian scholar in such fields.

Through her outstanding work and practice as a poet, she helped to centre dub poetry in Canada and beyond, and co-founded the Dub Poets Collective. As creative director of the DPC, Afua engaged communities through the literary arts, and thus enhanced the Canadian literary and cultural landscape. Further, she was instrumental in organizing several international dub poetry festivals. Afua has published five books of poetry, including the critically acclaimed Copper Woman and Other Poems. Her poetry has a strong sense of memory, history, place, and spirituality. Further, Afua has published two historical novels, which have garnered Canadian and American awards. Her work in the creative arts has been recognized with the Premier of Ontario Award for Excellence in the Arts, a Governor General’s Award nomination, and internationally with the Beacon of Freedom Award (recently awarded for her book My Name is Phillis Wheatley).

In recognizing the tremendous multi-discipline contributions Afua Cooper has made to Canadian society and life, and internationally, Essence Magazine named her as one of the twenty-five women who are shaping the world.

As a result of her scholarship and praxis, she was appointed in 2011 as James Robinson Johnston Chair in Black Studies at Dalhousie University, Halifax. As the Johnston Chair, she launched the Chair’s distinguished lecture series which for the past two years has brought scholars, artists, and activists to Dalhousie University and Nova Scotia as part of the chair’s work in democratizing epistemologies and bridging the gap between the academy and community.

The journal has recently been made available online through ProQuest.

Many back issues of our journals are available for purchase. Please contact us at info@rnshs.ca with your request. An Account of the Family and Descendants of Dr. John Halliburton (1739-1808) of Halifax, Nova Scotia
Gordon MacKay Haliburton

Celts in the Americas
Reviewed by Jerry White

The Education of an Innocent: An Autobiography
Reviewed by Corey Slumkoski

How Agriculture Made Canada: Farming in the Nineteenth Century
Reviewed by Julian Gwyn

City of Order: Crime and Society in Halifax
Reviewed by Henry Roper 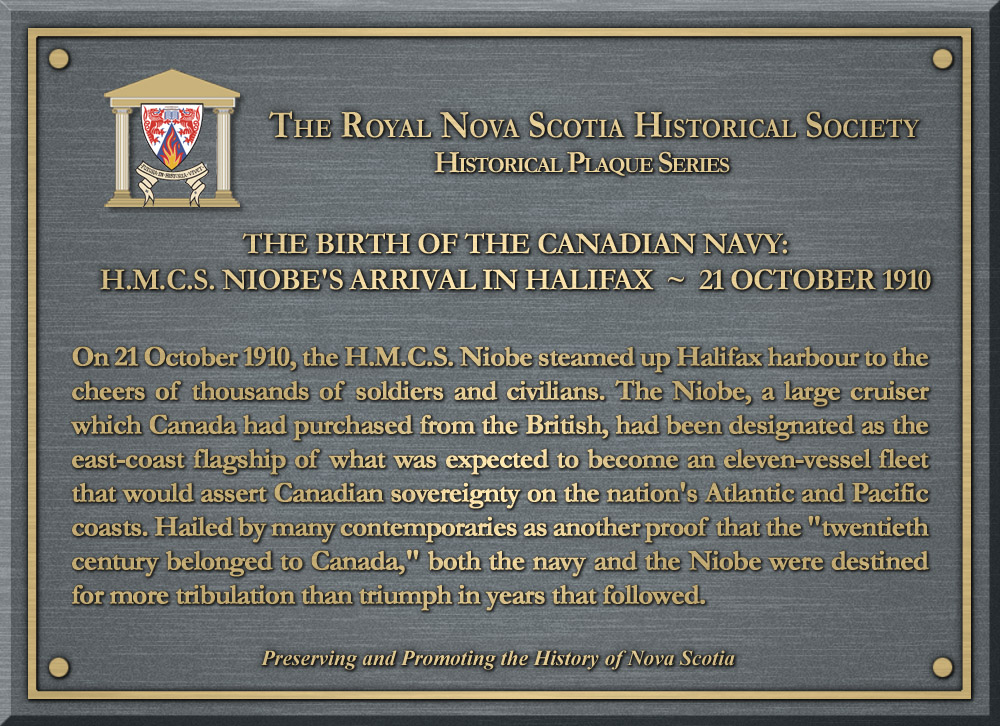 Click here to learn more about the birth of the Canadian Navy. 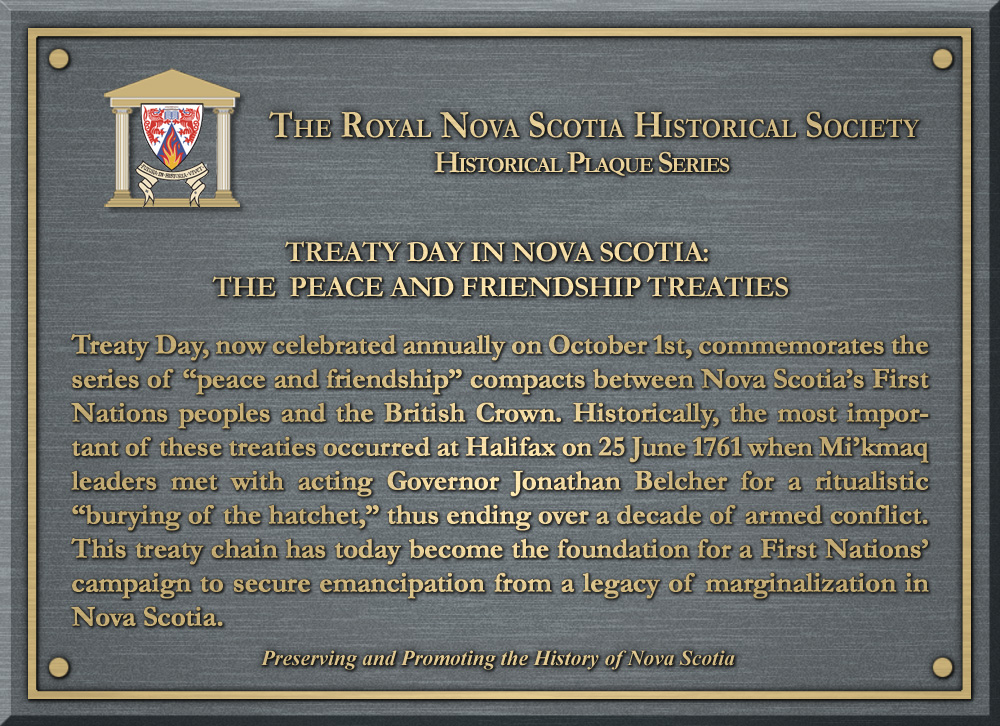 Click here for more information on the Peace and Friendship Treaties between the Malecites, Mi’kmaq, and Passamaquoddy and the Colonial Government.