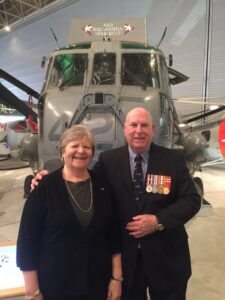 Photo caption: Colonel (Ret’d) Orr and his wife Cheri attend the induction of one of his favourite helicopters to the collection at the Canada Aviation and Space Museum on 9 December 2019.

Colonel Orr joined the Royal Canadian Navy in September 1963 and graduated in 1967 from the Royal Military College of Canada. Selected for aircrew duties, he completed five operational tours on the Sea King helicopter. Colonel Orr attended the Canadian Forces Command and Staff College and has held a variety of command and staff appointments in Canada, NATO and the Middle East. He retired from the Canadian Armed Forces in September 2000 and since then has volunteered as a researcher at the Shearwater Aviation Museum where he has concentrated his efforts on documenting the history of the Canadian Sea King helicopter as well as the history of the air station at Shearwater, Nova Scotia.