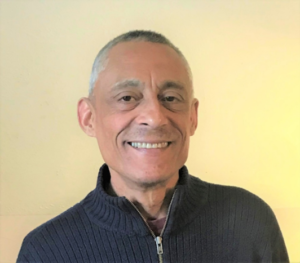 Wade Pfaff was born in Toronto during the Civil Rights Movement to a family of South African educators. A musician, creative artist and academic, Wade’s interests range from conducting Canadian Black history research, to studying and playing music from the trans-Atlantic diaspora on guitar and drums, to developing cultural education programs for marginalized youth. After completing a Bachelor of Community Studies degree and a Bachelor of Arts in Anthropology from Cape Breton University, where he was greatly influenced by Dr. Graham Reynolds, he went to Halifax to obtain a Master of Arts in Social Anthropology at Dalhousie University under the supervision of Dr. Afua Cooper. Wade is a Visiting-scholar-in-residence at Cape Breton University’s Centre for Sound Communities where he continues to study the relationship between the music of trans-Atlantic Black cultures during the early 20th century (especially Jazz and Blues) and improvements in civil rights for people-of-colour that came later in the century in Canada.