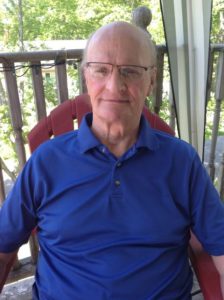 Bob emigrated from U.K. with his young family in 1968. He holds a B.A. Hons. Politics and Modern History, University of Manchester (a fan of ‘City’ and ‘United’) and completed Master’s course work in History at Dalhousie. He is a retired South Shore schoolteacher, principal, and supervisor of schools. His various accomplishments include being inducted into the Nova Scotia Sports Hall of Fame and awarded Life Memberships of South Shore District Soccer, Soccer Nova Scotia, and Canadian Soccer Associations for his services to the game. Bob has been a movie critic columnist and commentator with South Shore and Valley newspapers as well as CKBW for a decade. Bob’s publishing record includes Mahone Bay Old School: A life and Times. He is currently preparing a book for the Town of Mahone Bay, Mahone Bay entitled The Town: A Centennial Celebration, 1919-2019 which is slated for release later this year. Bob is also working on a book entitled Two Great Mi’kmaw Sagamows: Messamouet and Paul Laurent.